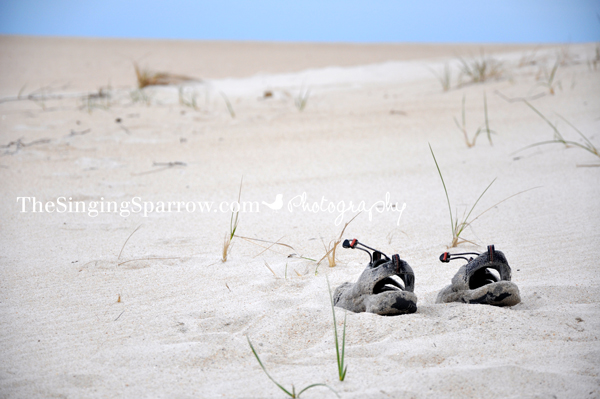 We took a long weekend last and went with a couple friends to Assateague Island National Seashore. Matt and I had been there last year on our vacation and wanted to go back, so we recruited another couple and headed down to camp a couple nights on the beach. Since it was the end of March, we had the beach pretty much to ourselves, save for a few fishermen.

The cooler weather meant the bugs weren’t out yet, but also, the ocean was too cold for swimming – unless, apparently, you’re a man.

In spite of the weather (we also had terrible wind Saturday evening) I think we all had a pretty good time. After checking in at the ranger station (which moved, by the way) and getting our backcountry permit, we had a quick lunch and set off on the hike, down the beach, to our campsite.

The National Seashore has six backcountry camping areas on the Maryland side, two on the ocean side and four on the bay side of the island. Each area has picnic tables and a chemical toilet and bayside sites also have a fire ring. It’s pretty nice for “backcountry.” We camped on the ocean side, but took a day trip to the bay side to do a little exploring.

We headed out Saturday morning to hike back up the beach a little way to the trail to the bay. Earlier, Matt had claimed to see dolphins, but nobody else saw them. Now, we all saw them. And guess what? The photographer on the trip had grabbed all the accessories for her camera and packed them in the backpack, but left the actual camera sitting in the tent. Thankfully, we were just yards away from the campsite and not all the way down the trail. So, Matt ran back and grabbed the camera, and I managed to get ONE shot of the dolphins before they moved further away from shore.

We did get to see the horses a little closer than last time. Much closer, actually.

The horses were the main reason that I wanted to go the first time, and after only being able to see them from across the island, I left a little disappointed. Not this time, though.

I still haven’t seen them on the beach and near the ocean, though there was a small group in the dunes when we got back to the beach.