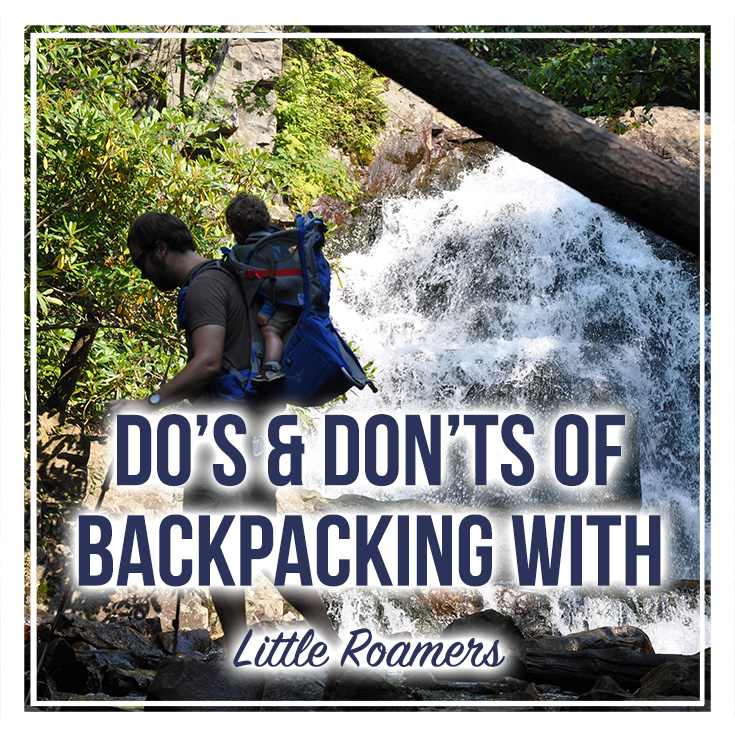 I know, I know, months ago I said I would be posting about our roadtrip. I wrote them all today, and scheduled them to release over the next week, so they really are coming this time. In the meantime…

We took Little Roamer on his first backpacking trip when he was just over 13 months old. I can now tell you a couple things to definitely not do. And I’ll mix in a couple Do’s as well.

Don’t go anywhere that doesn’t have a drinkable water supply.

For our first backpacking trip with LR we chose a place we had been before and love! There is nothing like camping on a deserted beach and waking to the sunrise over the ocean. Assateague Island National Seashore is an awesome place to backpack, and I would totally do it again, but not with a baby who can’t hike yet. You see, Assateague has no potable water, and even if you were to find a decent freshwater puddle to filter from, the wild horses guard it. So, you have to hike in all your water. It’s generally recommended to have at least one gallon of water per person, per day. You also have to take into account how much you use for meals – or mixing baby formula. For one day and overnight and a little in the morning, that’s at least three gallons, probably four. By the way a gallon of water weighs over 8 lbs. Yeah, add all that to the extra weight of the 20 lb. baby you have to carry, and it’s a lot. Seriously, what were we thinking.

Do bring a water filter.

If you don’t have to haul in water, don’t. Just don’t. Invest in a good filter. There are so many different kinds, and it’s really up to personal preference. We use the Sawyer Squeeze. We actually have two. One is a backup – not in case the filter fails, but in case it gets dropped in the stream and carried away which almost happened to us in the backcountry in Montana. Now we carry a spare. It’s seriously so light, there’s no reason not to. We also carry drops or tablets, but I’d rather filter my drinking water than treat it with chemicals, but hey, that’s me. Anyway, we love our filter, and I spoke to LR’s pediatrician early on about using water that we filter for mixing formula, and she confirmed what I suspected: if we can depend on it to get out all the bad stuff for us adults, we can depend on it for littles too. Obviously, you might have reservations about this or want to take to your own pediatrician, and I encourage you to do that.

Another type of water purifier that works great and we’ve seen in use many times is one that uses UV to kill bacteria. You stir it in the water for a certain amount of time and then it’s safe to drink. The only problem with this and a baby is it doesn’t remove any particles which could clog a bottle or sippy cup.

Don’t not plan around the temperature.

We usually travel during the off season or as close as we can get to it. The reason is partly that most prices are lower during that time and partly because there are less people to share the space. For this trip we chose to go in August because we would be ending our roadtrip at a kayaking festival. This meant it was still pretty hot at the beach. We arrived early, packed our packs and planned the hike for LR’s normal nap time which worked perfectly in that aspect. He napped pretty much the whole hike. But, it put us on the beach and in full sun in the middle of the hike. We were concerned with LR overheating so we kept a close eye on him. We dampened his clothes and kept him out of the sun, and he was fine. Honestly, he probably loved it – he has always liked to be toasty for nap time. But for the person carrying him – it was like wearing a heater while hiking down the beach, in the sun. Not cool. (See what I did there?)

Do keep little bodies (big ones too!) hydrated.

It’s so important to keep little roamers hydrated, especially since they can’t always tell you when they’re thirsty or when they don’t feel good. Make sure when you stop for a drink, everyone gets a drink. LR was off of bottles as this point and drinking milk, juice and water. We’ve already discussed water. Juice is easy – we dilute it with water, so a small juice box will make a large cup of juice or sometimes two. Easy enough to pack a couple juice boxes for the trip. My pediatrician also suggested gatorade or something similar when it’s particularly hot out.

Milk is a little different. There are many options. If you’re child is drinking formula, just pack it in and mix with water. There is also dry milk powder which is perfect if you need to save weight. Or if you’re not worried about weight – think day hike or car camping – you can buy unrefrigerated milk in a carton. I know, who woulda thought, right? We found it in the baking isle. Somewhere between the evaporated milk and buttermilk powder. I believe there was a skim milk option as well as whole. You want to be able to use it fairly quickly – I should be kept cold once it’s opened – and it’s a quart carton, so it’s best for multiple kids or you can drink it yourself. (I tasted it. Very similar to the taste of reconstituted milk powder, but totally drinkable, especially since milk on a camping trip is often a luxury.) For a smaller option for kids, I believe Horizon Organic makes a unrefrigerated milk box, but when I looked I could only find chocolate, so I’ve never tried it. I have used the Enfa-grow brand toddler milk boxes. They have a regular milk one (they also have strawberry or vanilla, I think) which has all the same nutrients as milk, with a few added vitamins and DHA. Obviously, any of these options should be kept out of extreme heat or direct sunlight, and if you are ever unsure about something, don’t risk it.

Do provide a sun shelter.

Much in line with the last point, babies can’t tell you when they’re getting too hot. Play it safe and keep them out of the sun (and use sunscreen!). LR wears a hat, sunglasses (sometimes), a very light shirt that we keep damp and cool, and as light a pair of pants or shorts as we can. He actually spent most of the time at the campsite in just a cloth diaper.

This isn’t really a must, but in my opinion disposables would just be extra hassle. Think about all those diapers your little one uses every day. Think about how nasty they are or how heavy some of them get. Now, do you really want to be carrying all that extra weight and grossness around with you? I don’t. We use cloth diapers when we’re at home, so it wasn’t anything new for me to get used to. However, I did make some modifications to the routine for backpacking.

First, did you know there are COMPOSTABLE inserts? It’s pretty genius, really. It’s an absorbent core that you can just throw out, but it breaks down instead of clogging landfills. Supposedly, you can put them in your compost pile at home (just the wet ones) and they’ll break down in no time. I bought ours (from gDiapers) specifically for hiking, so I actually haven’t tried this. But, they work perfectly for hiking and backpacking. I took three diaper covers. One to wear, one to be ready, and the other to be rinsed and drying. Instead of stuffing the insert into the pocket diapers, I laid it on top so the covers stayed pretty clean. If the covers get wet/dirty, you can rinse it out and hang it on a pack to dry while you’re hiking. The inserts can be buried as you would adult waste or, in the case of Assateague, put in the composting toilets provided at the campsites. No heavy, stinky diapers to pack out!

Ok, adjust this advice with the climate of your adventure. For example, on Assateague I had two blankets for LR – one a light muslin, the other a heavier, warmer for overnight. We did another camping trip when the weather was a little cooler, and he wore a full-body fleece-lined rain suit. In both cases, we decided to forgo the sleeping bag. It’s nearly impossible to find kid’s sleeping bags, let alone one that’s toddler size, and what I’ve seen is too heavy to pack and not rated for actual camping conditions. We’ll wait until he’s older to get him one. In the mean time, bundling him in warmer clothes works best. Think snow suit or jogging suit and lots of snuggles.

EDITED TO ADD: We ended up buying a fleece-lined rain suit for LR. It is one of our most-used purchases. It serves as a “sleeping bag” on cold nights, and a great way to stay warm and dry on wet days.

In the end, we had a good time. Little Roamer had his first trip to the beach and got to play in the sand, but next time we take a baby backpacking I think we’ll go to the forest. Somewhere with a stream and tree cover.

Also check out 5 Tips for Traveling with Little Roamers.