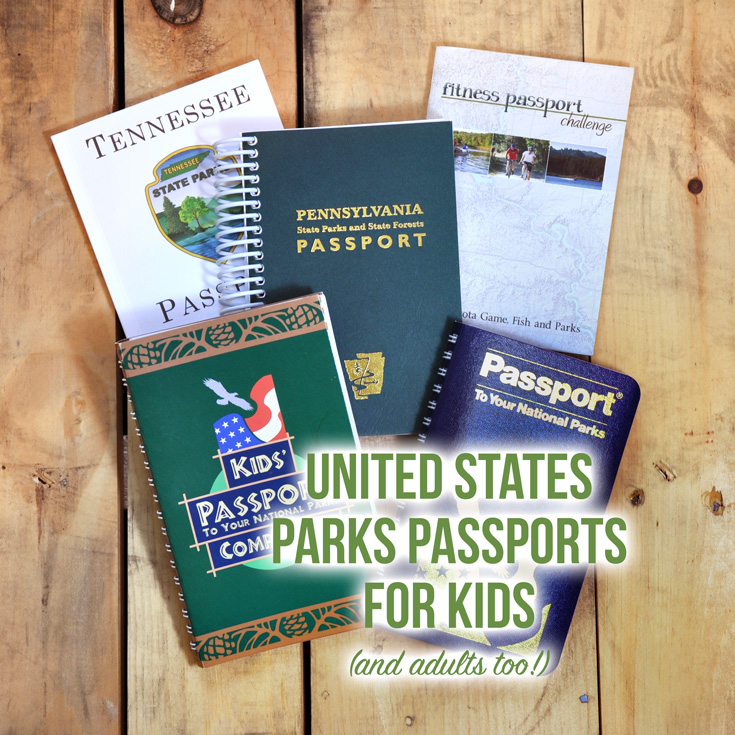 Little Roamer was given a National Parks Passport for his first birthday. (Actually, he was given three – one for each of us) He also got a Kids’ Passport Companion and a set of NPS Passport stamps for 2014 and 2015. I’m not going to lie, I was pretty pumped. I really love this idea!

Each passport is divided into regions. (North Atlantic, Mid-Atlantic, National Capital, Southeast, Midwest, Southwest, Rocky Mountain, Western, and Pacific Northwest and Alaska) Each region lists the National Parks and gives a brief history and some information about some of the parks in that region. Following are a few pages for official cancellations from the park office, just like a real passport. There are also spaces for the special passport stamps that are released every year. And finally, each passport comes with a pull-out color map of all the national parks.

The Kids’ Passport Companion gives TONS of information the different kinds of parks (there are actually 15 different types in the park system!) and the history of the park service and categorizes the parks into stories like “Stories of the West,” “River Stories,” “Stories of Famous Americans,” and more. Then there is space for Junior Ranger Program completion, a field journal, pages to keep track of birds or trees seen, “How did I help?” and ranger autographs.

It’s really a great program to get people, especially kids more involved and more interested in the parks and to get families out into nature.

Shortly after his birthday, I discovered that Pennsylvania recently introduced a passport program for PA State Parks. Of course I ordered one for LR. After searching the internet for a complete list of states with an active passport program and coming up empty, I compiled my own.

Here’s the list of Passport programs as of July 2015. I’ve also included some of the other programs offered by states that don’t have passport programs. If you find some information to be inaccurate or your state starts a passport program, let me know, and I’ll update the list.

Arizona
Passports no longer in print.

California
Book passports are not currently in production. At this time there are still a few available by contacting the park office. Not all parks are included and not all parks still have stamps available.
Kid’s Outdoor Parks Passport PDF – Outdoor challenge for kids – Not a passport program.
Kids in Parks page

Colorado
Passports are no longer in production, but the state parks still have stamps from the program that can be collected without a book.

Delaware
In the process of developing a passport program planned to be released by January 1, 2016.

Florida
Passports currently not in production but being considered to return to print.

Idaho
No passport program, but I was told they sell a book in park stores that you can use to collect stickers from Idaho State Parks.

Louisiana
LA State Parks Passport Challenge – Not a passport program. Download the app and record visits to each park to win prizes.

Massachusetts
DCR Massachusetts Park Passport – FREE – It looks like you can download and print out your own or pick one up at certain Passport Park locations.

Michigan
Passports no longer in print, but some park office may have a few available.

New Hampshire
Adventure Tracker Program – FREE – Not a Passport Program, but a booklet to collect stamps, record observations and keep track of adventures.

Oklahoma
Passports can be picked up at any Oklahoma State Park office. Collect stickers from each of the 34 State Parks. For every 6 unique park visits, get a state park token. Complete a fitness challenge to receive fitness medallions.

South Carolina
Ultimate Outsider Program – Not a passport program. Purchase an official guide ($2 + $2 shipping) and have it stamped at all 47 state parks to receive a t-shirt.

Utah
Passport program has been discontinued.

Virginia
Passport books no longer in production.
Trail Quest – After visiting a park, log in online to record your visit. You can also log your geocache finds at the same time for the annual geocache game.

Wisconsin
Passport program has been discontinued. There are a few passports left that can be requested, but not all locations still have stamps. Passport books can be initialed at locations without stamps.
Wisconsin Explorer Program – Not a passport program.